Here is the first overview of Christmas 7" vinyl singles that so far have been released or announced in 2020!

We first start with the three Snowflakes Christmas Singles Club releases, that will officially be in the shops on December 4, 2020, but are already available for pre-order through the Big Cartel site of the label. 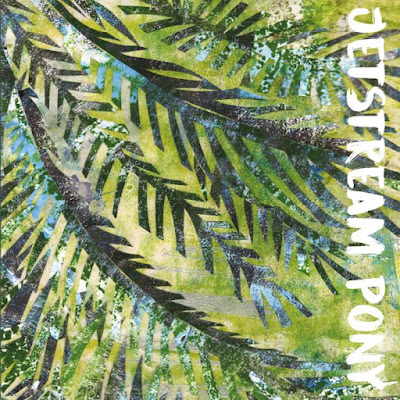 Jetstream Pony is a band from Brighton and Croydon in the southeast of England. The band features Beth Arzy (The Luxembourg Signal, Trembling Blue Stars, Aberdeen, Charlie Big Time, The Fireworks) on vocals, Shaun Charman (The Wedding Present, The Popguns, The Fireworks) on guitar and backing vocals, Kerry Boettcher (Turbocat) on bass and Hannes Müller (The BV's, Endlich Bluete), who makes his debut on drums here. So a lot of indie pop history is gathered in the band. Musically, Jetstream Pony takes its inspiration from the 1980s and early 1990s: postpunk, shoegaze and indie rock.
A-side 'Grief Of A (Frozen) Sailor' was written years ago on a winter's afternoon by guitarist Shaun Charman with his then eight year old daughter Nina, who originally sang the song. Jetstream Pony later played it at practices with lyrics tweaked by the band’s singer Beth Arzy, and now it finally finds a home on vinyl. Beth's vocals almost disappear in the storm of guitars in the chorus. On the B-side of their single they cover a track of the second album of San Francisco's The Aisler Set, 'Hit The Snow'. Jetstream Pony replace the keyboards of the original with guitars, adding a raw punky edge to the catchy indie pop winter song.
The single is still available for pre-order in many shops, but is sold out with the band and only available from Snowflakes by buying it as a set with the two other Snowflakes releases of this year.

You can listen to both songs on the Snowflakes Bandcamp. 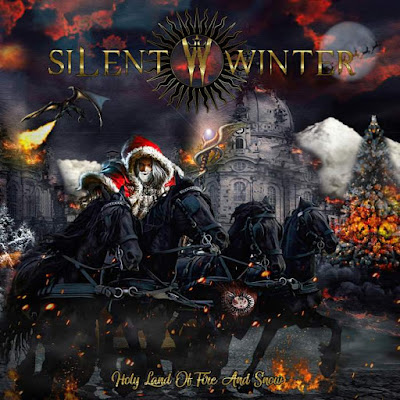 Silent Winter is a power metal band from Volos, Greece, already around in the 1990s, and having returned to the metal front since a few years with an almost complete new line-up. There have been very few metal Christmas 45s (Stryper, Bad News, August Burns Red and Lacuna Coil come to mind'. Last year, Greek power metal band Silent Winter recorded 'We Wish You A Merry Christmas' in full blown metal style, including high pitched yet melodic vocals and, of course, guitar solos. Given the more than 20.000 views of the video, it did indeed find an audience in the metal community. And now the song found its way to vinyl, as B-side to a Christmas metal 7". Songwriter and guitarist Kiriakos Balanos took up the challenge to write a new Christmas metal song, and came up with 'Holy Land Of Fire And Snow', the A-side of the single. It's five-and-half minute of fast paced power metal, that couples sleigh bells, an angel choir and church bells with heavy guitars, ultra fast solos and blast beats. The sometimes melodic and sometimes screaming vocals of Mike Livas tell the tale of this holy land of fire and snow, where Santa reigns, who doesn't seem to be as peaceful as we have been told, as he travels through the black and starry sky with his burning sleigh, causing panic and destruction along the way. As with all good metal - has to be played very loud to be fully enjoyed! 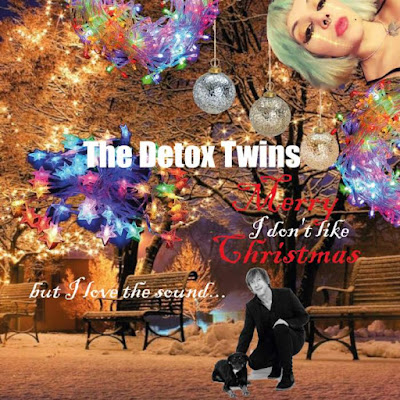 The Detox Twins is the duo of Berlin-based poet Devi Von Teufel and Mark Vorderhaus, who now resides in Yorkshire. Since 2014, The Detox Twins have released a range of mostly lathe cut 7"'s on Polytechnic Youth, that, as all releases on that label, sold out in no time. The Detox Twins don't particularly like Christmas, but still they have recorded a Christmas single. Why? Because they do love the sound of Christmas, as Devi assures us on the A-side. Mark backs up her words with a soundtrack of catchy early 80s inspired synthesizer wave and electro. On the B-side The Detox Twins turn the most famous British Christmas rock song ever, Slade's 'Merry X-Mas Everybody', into an electro pop song, with vocoder style vocals by Mark. 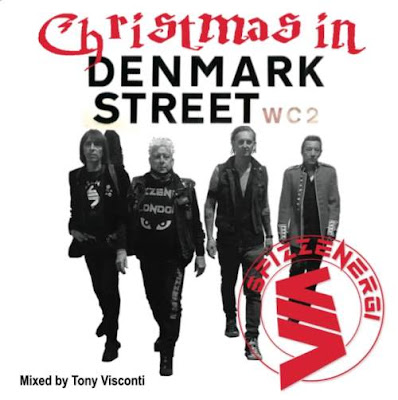 Spizzenergi is best know for their late 1979 single ‘Where’s Captain Kirk?’, a punk/new wave classic and the first single to top the UK Indie chart, that existed throught the 1980s. Apart for that, the band, with singer Spizz as only stabile factor throughout the years, is known for their many name changes. Starting out as Spizzoil, the band became Spizzenergi, then Athletico Spizz 80, The Spizzles, Spizzenergi 2, and, after Spizz went solo, SpizzOrwell and Spizz And The Astronauties before reforming and returning to their best known name, Spizzenergi. When the band was orginally around, Denmark Street was the street to be in London if you were a musician, with music shops, recording studios and nightclubs. It was also the street where The Sex Pistols lived for a while, and recorded their first demos, so it has an important role in the development of punk. To that Denmark Street, now almost completey gone, Spizzenergi pays tribute in their punk ballad ‘Christmas In Denmark Street’. The song is more about Denmark Street than about Christmas, but that doesn’t prevent the song from sounding very Christmas-y, with all the usual Christmas ingredients (bells, singalongs). It was mixed by another music veteran, producer Tony Visconti. Not Visconti’s first try on Christmas music, as he had produced his wife Mary Hopkins’ 1972 Christmas single ‘Mary Had A Baby’ – a personal favorite – and also Elaine Paige’s 1986 Christmas album ‘Christmas’. 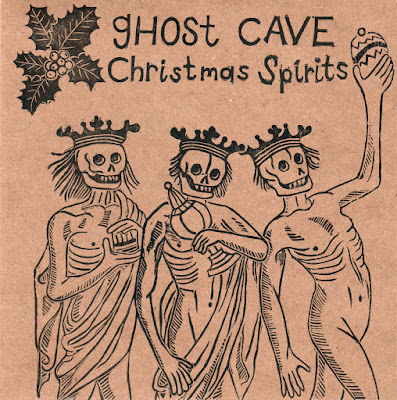 Ghost Cave is the electronic music project of the Atlanta, George based dj BC, with a sound that is influenced by hip-hop, ambient, punk, reggae and funky dance music. Early this year, Ghost Cave released a limited single 'Haunted', that, although already released in April, was perfectly suited for Halloween. On that 7", the hip-hop influences were very prominent, their Christmas single shows the more their ambient side of Ghost Cave. Instead of haunted, the two tracks on this single sound haunting. On side A, Ghost Cave is joined by violist and vocalist Ana Balka (who has been featured on records by Superchunk and The White Lights) for a beautiful and otherwordly and ethereal version of 'The Holly + The Ivy'. On the B-side, it's Scott Burland's theremin that steals the show on a melancholic and spooky sounding 'We Three Kings'. The single comes in five different colour variations (see above), beautifully packed in a block printed cover, designed and hand printed by Canada-based visual artist Jane Dupious, with two stickers, a button, a pin, a magnet and, for some extra money, a Ghost Cave 45 adapter. The record is not really cheap ($20), but it is a beautiful package, and some of the most spooky Christmas songs you will hear this year. And if you really think it’s too expensive, there is also the possibility to buy the record without the artwork, for only $ 5. Now that is cheap! 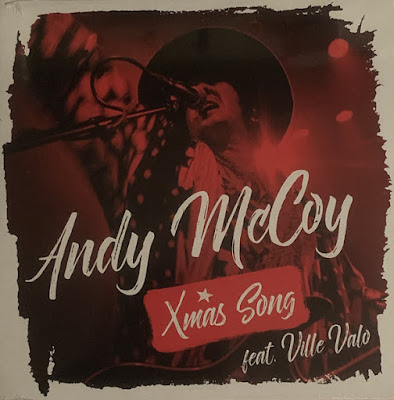 Andy McCoy’s Christmas single ‘Xmas Song’ was already released on September 26, as part of the second drop of Record Store Day, in Finland, where Andy McCoy is from. You don’t expect someone with that name to come from Finland. A name like Antti Hulkko is more what you would expect. So no surprise here that Antti Hulkko is Andy’s real name. In the late 1970s, McCoy was in the Finnish punk bands Briard and Pelle Miloona OY, but when he joined rock band Hanoi Rocks as lead guitarist and main songwriter in 1979, he was one his way to rockstardom. Hanoi Rock moved to England in the 1980s, and built a very succesful international career, becoming the first Finnish band to chart in the UK, one of the most succesful Finnish bands ever and a big influence of the glam metal scene of the 1980s. Hanoi Rocks broke up in 1985, after which McCoy continued with The Cherry Bombz, with former members of Hanoi Rocks, The Clash and Toto Cuelo and later also played for some time with Iggy Pop. From 2001 to 2009 Hanoi Rock reformed, and after that, McCoy continued his solo career. In 2016 he recorded a Christmas single, ‘Xmas Song’, that featured additional vocals by Ville Valo, singer of another international very succesful Finnish band, gothic rock band H.I.M. The song was only released on a CD-single, that sold out quickly. And now, 4 years later, it is re-released, for the first time on vinyl – that also sold out quickly. ‘Xmas Song’, on the B-side in a edited radio version, is a wall-of-sound like Christmas pop rock song, that sounds quite 1980s, with saxophone and, of course, lots of guitar, with McCoy and Valo singing about Santa, peace on earth and wishing it could be Christmas everyday (to quite another famous Christmas rock song).

Buy: sold out, but try Discogs