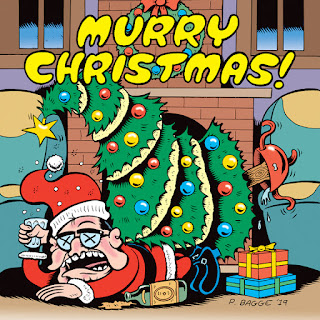 ‘Murray Christmas!’ is the second volume in the ‘George Faulkner Sings Murry Wilson’-series. George Faulkner is an American songwriter and recording artist, who was the lead vocalist of New York-area powerpop band The Rabies in the 1980s and of indie rock band The Juicemen in the early 1990s. George seems to have a fascination for the Wilson-family, as in 2015 he released a digital single of the Dennis Wilson track ‘Under The Moonlight’ (as ‘George Faulkner Sings Dennis Wilson’), and now he is in the process of recording twelve ‘lost’ songs by the padre des familias, Murray Wilson. Although he was not as talented as his son Brian, Wilson senior had some success as a songwriter since he started out in the early 1940s. He wrote at least over 50 songs, of which some where recorded by the likes of The Bachelors, The Jets, The Four (Hollywood) Flames and Johnny Hall And His Star Rangers. But he never had any hits, like his far more succesful sons had.

In 2016 George released a digital single of the Murray Wilson song ‘Two Step Side Step’ as volume 1 in the series ‘George Faulkner Sings Murray Wilson’ and now, three years later, he releases a vinyl single with two Murray Wilson songs as volume 2. And what is of interested for us here, is that the A-side of the single is a Christmas song! Murray Wilson wrote ‘Happy, Happy Holiday’ in 1952 and that year, it was also recorded by The Bachelors. The Bachelors were a trio from Los Angeles, led by accordion player Jimmy Haskel. The song was released as B-side to The Bachelor’s 78 rpm single ‘If The Sun Took A Shine To The Moon’ (Palace Records 111). In the early 1950s, the 78 rpm record was still the standard single format, and many singles were not yet released on a 45 rpm vinyl record. Unfortunately, that was also the case with this Bachelors single – so no need to hunt a 7” version of this single down.

George takes this project very serious, seeing who he brought in to record his version of ‘Happy, Happy Holiday’. The track was produced by Tony Maimone (member of legendary art rockers Pere Ubu from 1976 to 1982, and then again from 1987 to 1993 and in 2003 and 2004, who also worked with Bob Mould, They Might Be Giants and Frank Black, among many others) and arranged by Joe McGinty, (who was in the Psychedelic Furs and worked with Ronnie Spector), while George is accompanied by members of the NYC tribute collective The Losers Lounge.

No more accordion on George’s version of the song, but instead, a Moog! The original recording is nowhere to be found on the internet, so I don’t know how that version sounded, but this new version of ‘Happy, Happy Holiday’ sounds like a Christmas on a sunny beach somewhere in California, with a pina colada in hand. The pa-pa-pa’s and Beach Boy-style harmony vocals give the song a real sunshine pop feel, and the Moog, xylophone and percussion add a happy party feeling – totally in line with the lyrics, as these are all about having a good time at Christmas. Great song!

The B-side, 'Te-e-e-e-ex-as', another Murray Wilson-song that originally had been recorded by The Bachelors, has nothing to do with the season. It sounds exactly as you would expect from a song about the Lone Star State – as a country song. It was recorded with Peter Katis (Kurt Vile, Interpol,The National) behind the console.
The 45, that was officially released on November 8, comes with great artwork by Peter Bagge, is released by George’s own label Bolt Records, and can be bought directly from George via Discogs.