Apart from the Snowflakes Christmas Singles Club, there are four more labels that every year release at least one Christmas 7" single. This post gives an overview of the 2020 releases of those labels: Nordpolen Musikklubb from Norway, Jump Up! Records from Chicago, IL, Kingfisher Bluez Records from Vancouver, BC, Canada and Gotta Groove Records from Cleveland, OH. 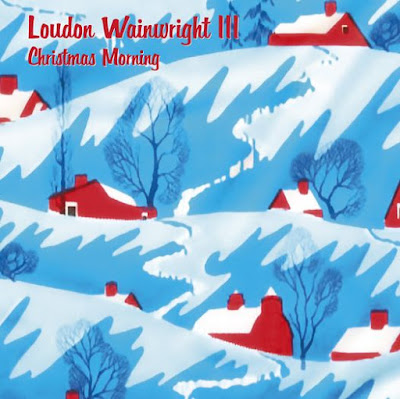 For the 7th year in a row, Norwegian label Nordpolen Musikklubb releases a Christmas 7”, and this time it’s a 7” with three songs, all by American folk singer and actor Loudon Wainwright III, whose debut album was released exactly 50 years ago. The songs all appeared on previous albums by Wainwright. The title song is taken from 1999’s ‘Social Studies’, an album of songsoriginally written for the National Public Radio, as comments on current topics. ‘Christmas Morning’ starts as an ordinary Christmas song, describing the scene on Christmas morning, with schools and offices closed, presents under the tree, Christmas dinner and skaters in the winter light, but then it tooks a more grim turn, with the homeless nobody wants to see, people dying of Aids and people gathering not far from Bethlehem in a warlike way, before closing the song hopefully: the fight against stupidity will continue in the new year, a new year that might bring cures, solutions and comprises. ‘And if we are careful, we might survive’. The song is 21 years old, but this last sentence could have been written today.
‘I’ll Be Killing You This Christmas’ is from 2014’s ‘Haven’t Got The Blues (Yet)’ and is a biting commentary on US gun laws, disguised as a relaxed folk song, using the melody of ‘I’ll Be Home For Christmas’. ‘This Year’, on the B-side of the single, is the oldest song, taken from 1989’s ‘Therapy’. How well the song resonates with 2020: ‘Last year was a fiasco / A real disaster / So full of sorrow”. Also this song is optimistic, and looks forward to a better new year: ‘This year will be a great year / I just can't wait, dear / Until tomorrow’. But let’s not be too negative about 2020 – like every year, it also brought good things, like this single! It is limited to 300 copies and comes, as usual, in a picture sleeve with beautiful seasonal artwork, on green vinyl.


'I'll Be Killing You This Christmas': 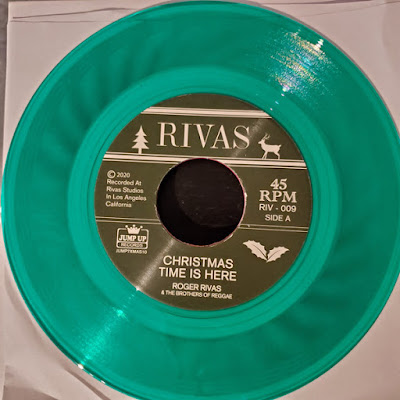 Jump Up! Records released their first Christmas 7” in 2010, by the Spanish girl group inspired The Pepperpots, and since 2014, have been annually releasing Christmas 7”’s of ska and reggae bands. Roger Rivas already did two Christmas 7”’s for the label, 2015’s ‘Deck The Halls’ b/w ‘Jingle Bells’, and 2018’s ‘Joy To The World’ b/w ‘Winter Wonderland’. Just like that 7”, this 7” is a coproduction with Rivas own label and was recorded with The Brothers Of Reggae. Vince Guaraldi’s soundtrack for the Charlie Brown Christmas special has become one of the most loved Christmas albums, and Rivas pays tribute to the album by covering the two best known songs: ‘Christmas Time Is Here’ and ‘Linus And Lucy’. Rivas does it in his wellknown laidback rocksteady style, and it works. In ‘Christmas Time Is Here’ a midtempo rocksteady beat lays the foundation while Rivas’ organ plays the melody of the song and, lets the jazz cat in himself lose for some short improvisations in the middle and towards the end of the song. On the B-side, ‘Linus & Lucy’ is faster paced, and again Rivas’ organ takes center stage. Another fine addition to the Roger Rivas Christmas song collection. The single comes on green or red vinyl.

Watch the video for ‘Christmas Time Is Here’: 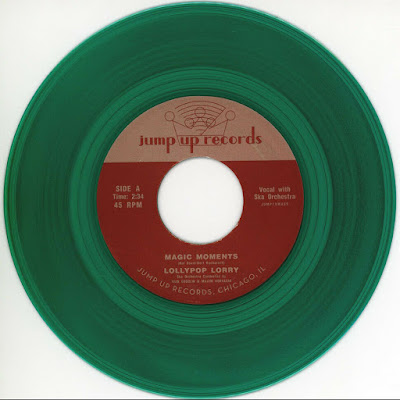 The second Christmas 7" released by Jump Up! Records this year is by Lollypop Lorry. Lorrypop Lorry is a ska/reggae band from Yekaterinburg, the fourth-largest city in Russia, located on the Iset River in Western Siberia. Reggae from Siberia, it only shows how truly international the language of music is! Lollypop Lorry started in 2008, self releasing their first few records on burned Cdr’s in a true DIY-style and slowly building a fanbase, not only in their hometown, but all over the world. In 2018 the band made their proper album debut on Russian label Magnetic Loft Records with ‘Ural Station’, refering to the area the band is from. After a live album in 2019 and a dub album in 2020, it was about time for the first 7” release of the band. ‘Magic Moments’, the A-side, is a song that was written by the famous songwriting duo of Burt Bacharach and Hal David in 1957, as one of the first songs they wrote toghether. Perry Como recorded the original version of the song in December that year, as B-side to his single ‘Catch A Falling Star’. Although only intended as a B-side, the song was so popular that it hit number 4 in the US, and even went to number 1 in the UK when released as a single early 1958. The song was later recorded by, among others, Ronnie Hilton, Connie Francis, Gerry & The Pacemakers, Erasure, The Vindictives and Snuff.
Como’s version had a subtile back beat (and catchy whistling), so it was not such a weird choice of Lollypop Lorry to turn it into a ska song. ‘Magic Moments’ is not really a Christmas song, but it’s a song about lovers remembering all the fun things they have done together in the past – like ‘The way that we hugged to try to keep warm / While takin' a sleigh ride’. It was probably this line that made Lollypop Lorry decide to turn it into a Christmas song, by filming a very festive looking video to accompany the digital release of the song last year. And now Jump Up jumped in to release the song as a Christmas single. The flipside of the record, ‘Rockin’ Around The Christmas Tree’ is as Christmas as Christmas songs come. As could be expected, it is a skafied version of Brenda Lee’s classic ‘Rockin’ Around The Christmas Tree’, and has, staying true to the original, female vocals. The single comes on red on green vinyl (200 copies each), and includes a photo of the band taking at the set of the ‘Magic Moments’ video.


Listen to ‘Skankin’ Round The Christmas Tree’: 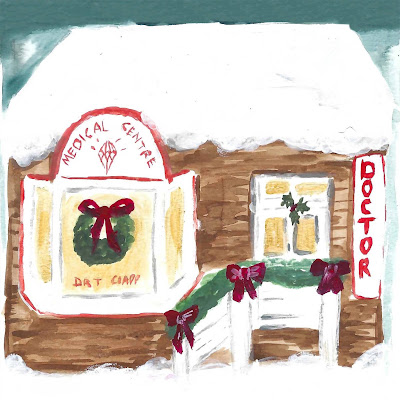 Kingfisher Bluez Records is always one of the last to arrive at the Christmas scene with their annual Christmas 7” release – their ninth year in a row, so next year is a reason for celebration! But it is always well worth the wait. This year, Kingfisher Bluez even offers up four songs by four different artists, three from Vancouver, where the label is also based, and one from the USA. Kingfisher Bluez is a indie label, but they cover all parts of the indie sound. On this EP, folk, dreampop and synthpop are the main ingedrients. It opens with singer/songwriter Haley Blais who does a fragile sounding version of ‘Auld Lang Syne’, accompanied by piano and subtile synths and guitar. The song is the longest of the four (just over 3 minutes), and also is accompanied by a very funny video. All other songs are about two minutes long. Fawns Of Love, the husband and wife duo of Jenny and Joseph Andreotti from Bakerfield, California, are the only non-Vancouver based act of the 7”. They have released a 7” on Kingfisher Bluez earlier this year, which I liked a lot, that featured the Robin Guthrie (Cocteau Twins) version of their 2018 song ‘Someday’. Fawns Of Love do a dream/synthpop version of ‘Sally’s Song’ from The Nightbefore For Christmas, a highly original choice for a Christmas cover song.
The only original song on the single is by the Vancouver indie group Bookclub, who sing about ‘A Bookclub Christmas’, in a style that is not so different from the Fawns Of Love track, a combination of dreampop and synthpop, while the lyrics seem to touch a common theme at Christmas, missing someone you lost. The EP closes with the contribution by the youngest act on the compilation, Kylie V (self-described as nice soft nonbinary indie rock), who debuted in 2018 as a 14-year old. Last year, Kylie released a digital Christmas EP, ‘Baby’s First Christmas’, with four Christmas classics (but not the Connie Francis song the EP was named after), and here Kylie does the most classic of the Christmas classics, ‘Silent Night’. It’s just Kylie's voice and an acoustic guitar, and that is enough, as it is a beautiful and fresh sounding rendention of a song that already has been recorded thousands and thousand times. As always, the record is a benefit for 1-800-SUICIDE and Crisis Centre BC.


Listen to the complete EP: 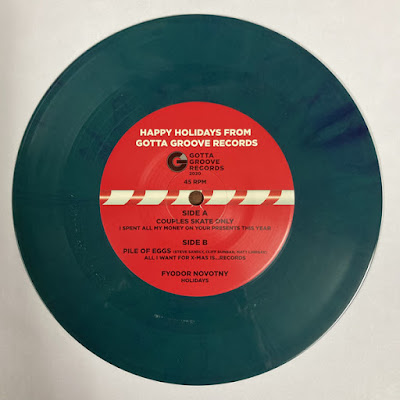 This year marks the 10th anniversary of the Gotta Groove annual Christmas single, a Christmas present for the pressing plant’s customers, done by bands that feature members that work at Gotta Groove, so time for a celebration. And it is celebrated with a strong edition, with three completely different songs. We see the return of two acts that have been featured before on those compilations, and one act that debutes, although the band itself is the oldest featured on this year’s complilation. Couples Skate Only, the family band of the Thorntons, first appeared in 2013 with ‘First Christmas’, then returned for 2017’s wonderful ‘Absentees & Invites (The Solstice Show)’ and now opens the single with ‘'I Spent All My Money On Your Presents This Year', an 1980s inspired synthpop/new wave song (Devo comes to mind) that has vocals by the complete family (mom, pop and the daughters), and is all about buying Christmas presents. Despite all the different presents mentions in the Couples Skate Only song, Pile Of Eggs knows what we really want for Christmas: records! The noisecore band, already around in the early 1990s, have reformed to tell us what kind of records they want for Christmas: pop, jazz, blues, thrash metal, dubstep, but they don’t seem to be interested in Christmas records, as they don’t mention those. As for the music, a good candidate to break up a Christmas party that has been going on for too long. Fyodor Novotny closes the compilation, and they were featured on last years edition with ‘Dear Santa’, and now do another instrumental song that sounds like coming from the soundtrack of a Christmas-themed thriller, ‘Holidays’. There are two editions of the record: a regular edition on randomly coloured vinyl (550 made), and a test pressing on black vinyl, that is more limited (only 15 made) and more expensive.